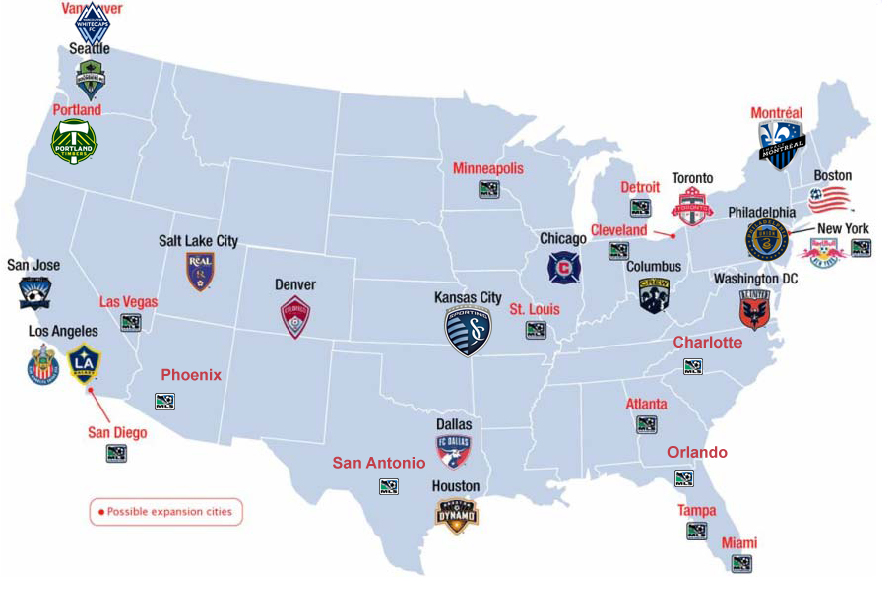 That’s the state of the nation from MLS’s commissioner in chief when it comes to expansion.

News has been bubbling for a while, and now it’s official – there will be an expansion plan in place in the next six months which will take this league beyond their current stable of 24 teams.

“Make no small plans” – the widely popularized Daniel Burnham quote is befitting here. This is a league launched in 1996 with 12 teams; cut to 10 by 2002, before riding its present day wave of shifting demographics and soccer uptake to 20 established franchises, four new teams on the way… and now plans for more in the works.

It makes sense – when it comes to soccer, America has become a dramatically different place than it was – it is now the second favorite sport of the millennial population (18 to 24 and 24 to 35) after the NFL. That said, they must still expand strategically.

There are plenty of US cities with burgeoning soccer markets that would belong in MLS, plenty of whom would no doubt be successful. And that is the reason for the statement of intent to go bigger.

A strong line-up – some of whom will be more advanced than others.

But in order to prove they truly fit the bill, they have to prove they have the fundamentals required for a successful franchise – the right ownership group; a guarantee their market will bring attendance; get a stadium in place (something David Beckham is learning the hard way); and finally, get your product right.

Build clubs. Build a league. But don’t forget the product.

The goal is surely that MLS become a destination league for the best players around the World. But that is not simply about pushing out more clubs. MLS has to figure out how quickly they can grow while ensuring that it still puts a quality product on the field.

It’s a bit chicken and egg.

But they are making the right strides – the last few months have been some of the most remarkable in their history. They have continued their diaspora of coverage with a growing list of global media partners – as of this season, MLS is now shown in more than half a dozen countries around the world.

All significant steps in increasing the relevance and popularity of the league worldwide and taking them close to their stated goal of being one of the top leagues in the world come 2020.

Time will be the teller.

Although still in its infancy at barely 20 years old, MLS has moved on from struggling to find relevancy in the American sports market and is beginning to speak with one voice.

Now this voice needs to stay true to itself and the game to satisfy the emerging commentary on how expansion will define the league.