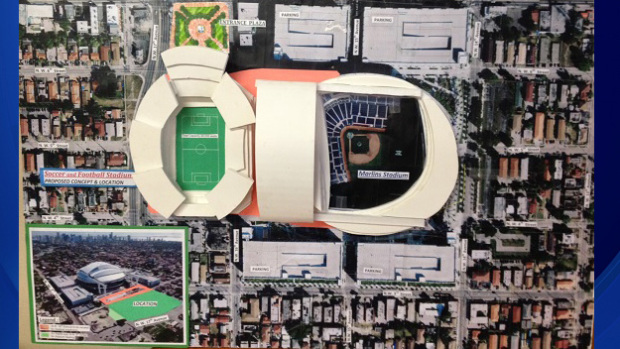 … that was David Beckham’s point of view.

That point of view concerning the announcement made on Friday 17th July – 18 months since news first went public – confirming that it was (almost certainly) official that Major League Soccer would be coming to South Beach. The time is now.

This signals their new beginning.

It was February 2014 when Beckham and his group first stated intentions to own a new MLS franchise and the road since then has been a long one.

Their 18-month journey has been characterised by plenty of bluster – haggling with city lawmakers over a potential stadium location – and little in terms of results.

MLS uphold a ruling which states that every team must have a stadium to play in and this became the Beckham group’s achilles heel in making this franchise a reality – they simply could not reach a stadium agreement with the City of Miami.

Until now, it seems. If all goes to plan with this initial agreement, they will have a place to call home in the form of a privately funded 25,000-seater arena on city land at the former Orange Bowl site. This site would make them neighbour’s with the Miami Marlins’ baseball team.

A milestone to remember.

To be clear – this plan does not mean a stadium is a certainty. They are still in the early planning stages and several viable options still exist. But at least the Beckham group has set their stall out with this proposal.

In their favour, they have Miami mayor Tomas Regalado calling this moment a “milestone” – and actively making it his responsibility to socialise this proposal amongst city commissioners for formal approval in a referendum.

It always needed to be right for all parties.

MLS officials long said that Miami holds the potential to be “a great MLS market”, but expanding to Miami was contingent on securing a financing plan and location for a new stadium – just because an opportunity existed didn’t mean that a deal would be closed.

Friday’s development puts these concerns at rest for the league.

The powers in the City of Miami – similar to the powers within MLS – were never afraid to turn Beckham down. The proposal had to be right for the City.

Beckham’s original pitch saw them present a ‘what-could-be’ extravaganza in Miami involving stadium mock-ups placing the would-be franchise in a glamorous Downtown venue next to the Miami Heat in a glitzy, waterfront nirvana. That proposal was met with swift opposition and quickly shot down.

It is worth recalling that this proposal’s location – Marlin’s Park – was first thrown into consideration at the start of the process by Miami City officials – but the Beckham group largely ignored it. Now they seem to have relented to pressure to consider the location, as it may be their only option for political support for a stadium plan.

The thing is, building next to Marlins Park also makes the most logistical sense. This puts their new MLS franchise next to an iconic Miami (and American) sporting property in the Miami Marlins – giving them built-in proximity to an existing fan base and could lead to the creation of an amazing urban park surrounding both stadiums.

The chips now seem to be falling into place with the City.

Next up, converting the commitment.

It has been a long road and progress has been soberingly silent, but Friday’s news should end the concerns and conjecture. It is very nearly, almost reality for Miami and progress can now take a new form to what it has in the past.

They have the commitment of the mayor to push this new stadium proposal with the right people within the City to secure approval. And now with their commitment to partner with the City, they can switch focus onto the stadium itself (not simply location) and the franchise.

The stadium gives them permanence, but they need a brand to fill it – selecting a name, finding players to target and planning ways to get fans in the stadium when it does eventually open should be next on the agenda if they intend for the franchise to take the field for the 2018 campaign.

The Beckham group has been unforgiving with its intent to bring a world-class soccer franchise to Miami. But the rapid pace of change across the soccer landscape can’t be ignored – the sooner Beckham can move into this space, the better.