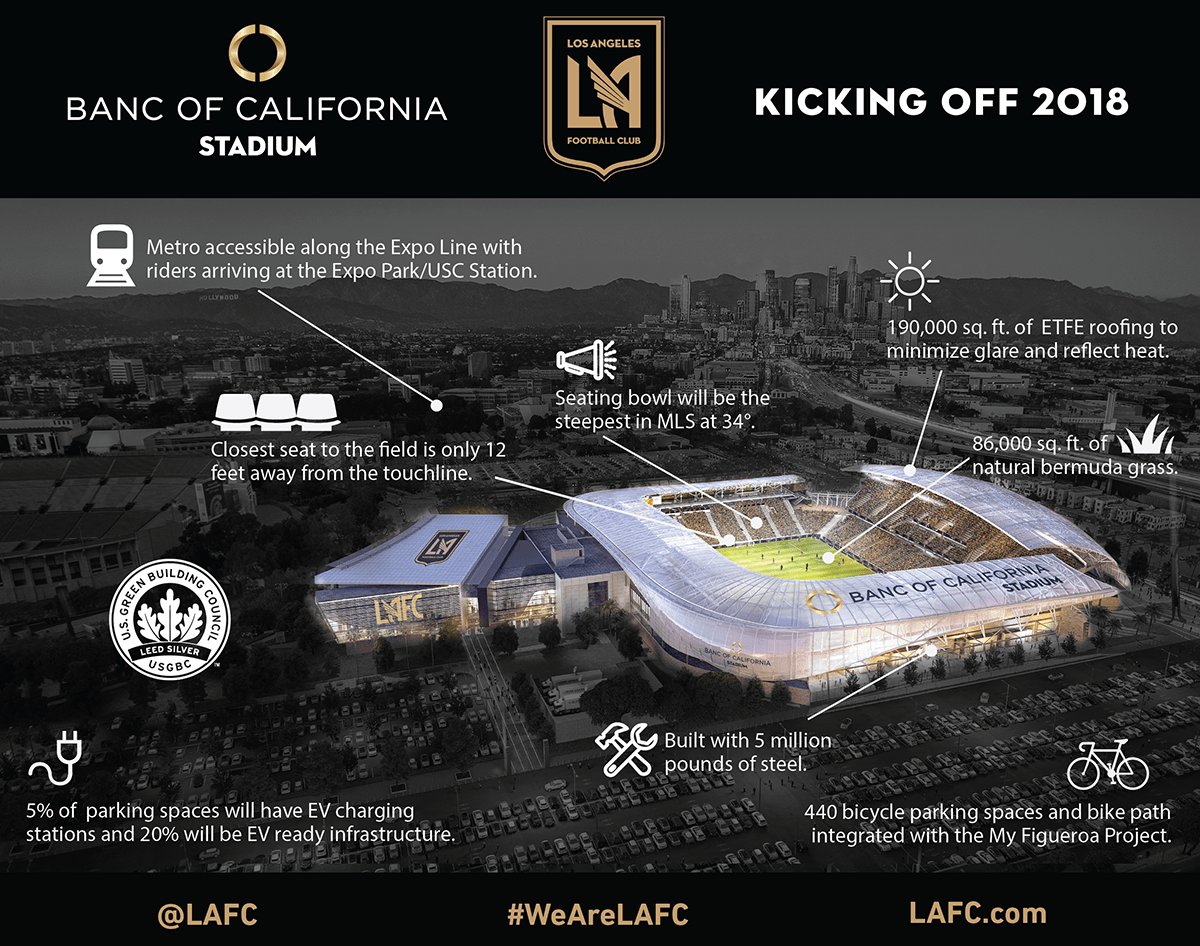 Finally Southern California’s newest franchise has a home, and it could well be the crown jewel for soccer stadiums in America.

And the location is about as good as it gets.

Sitting on the former Los Angeles Memorial Sports Arena – a place with a rich LA sporting history having been home to the Lakers, Clippers, World-famous music concerts, and notably, the place John F. Kennedy accepted the nomination to become President – now, this once preeminent venue is part of another’s chapter, LAFC.

And with it, they kick start one of the biggest economic development projects the region has seen – this is not merely a stadium, but in the process creating an entertainment district befitting of such an entertainment town.

This may well become a Los Angeles cultural landmark. But looking at it from a different angle – one evaluating how soccer-specific a stadium is – could this mark the future?

SO WHAT ACTUALLY MAKES A STADIUM SOCCER-SPECIFIC?

Major League Soccer recognised in its early days the enemy of an unforgettable game-day experience are swaths of empty seats. And so they lead their modern day transformation – and in large parts their growth – around stadiums: rather than MLS clubs being tertiary tenants in other team’s stadiums, MLS clubs would have their own homes. And these homes were to be designed specifically with the soccer fan in mind – to allow the energy, intimacy and passion of the game to come through.

So that’s exactly what LAFC have done: a 22,000-seat state-of-the-art venue defined by it’s proximity to the action (they will have the closest seats from the touchline in the league at 12 feet; and at 34°, seating will be among the steepest, putting fans as close to the action as possible).

And at a cost of $350m, it is also the most expensive soccer stadium in the country, but with an expected $130m a year economic impact and nearly a third of this already recuperated through sponsorship, it seems like good business.

That’s what it cost to attach your name to it, and what Banc of California have agreed to pay over 15 years for the right to do so.

LAFC will see $6.7m/ year from this deal, making it not only the largest sponsorship in the history of MLS, but more importantly topping similar arrangements in the bigger leagues – for context, the NFL’s Baltimore Ravens’ naming rights deal with M&T Bank was recently extended for less, at $6m/ year.

Away from monetary value though, this partnership represents what partnerships should be about – more than sharing logos; it is about sharing values and leveraging each party’s equity to underscore a commitment to the people they serve.

In this instance, this deal is pursuant to the economic and social benefits of the stadium flowing to local communities first – jobs (nearly 3,000 of them, of which 40% are slated as local hires), education, local infrastructure, better access to capital for local businesses, as well as increased access to banking services.

While this partnership is built on a bigger footing that just naming rights, it probably also helps that both brands share the same black-and-gold colour scheme as they focus on making this the most impactful partnership in MLS.

$100m? It may well be a small price tag for the exposure it brings.

AND PAYING FOR IT.

Another area this deal is also groundbreaking is in a commercial sense.

Whereas previous MLS stadium loans included recourse debt (which meant team owners were responsible for repayments if revenue from the stadium fell short), this loan is collateralised solely with revenue from the facility – the first deal of it’s kind in MLS history.

This is a massive endorsement in the confidence of the league and where it is up to in terms of it’s growth; and it comes as they prepare to almost double franchise expansion fees to about $200m (LAFC signed on for $110m in 2014) and look to quickly expand the league to 28 teams (before going on to follow a divisional model, not unlike the NBA).

MLS teams are averaging $157m in value (with three clubs – the Seattle Sounders, Galaxy and Houston Dynamo – valued at at least $200m), and with commitments to new franchises in Atlanta – which begins play next season – and Minnesota in 2018, while the league continue negotiations with David Beckham’s ownership group about putting a franchise in Miami, there is a lot going on to keep the confidence high.

NEXT FOR LAFC: THE PRODUCT.

While MLS has been going for 20-plus years, right now, it is on the cusp of breaking through to the next level and becoming a global force, and it can be lead in part by this team.

But let’s not forget, right now, the LAFC we talk of is still a club without players or a coach. So with the stadium construction in motion, shifting focus to soccer-operation-matters and the development of the on-field product is what’s next, namely the player conversation…