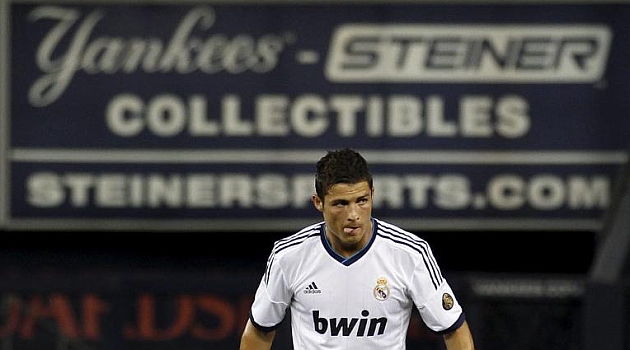 At a time when a large share of the media is dominated by Donald Trump’s unscripted annihilation of his presidential competition, there was a piece of Trump media which went largely un-noticed.

That was Cristiano Ronaldo paying $18.5m for loft in Trump Tower in New York City.

This is telling – Ronaldo clearly has plans to spend his time Stateside. But a more interesting question is if that time will also be spent on the football field, and where that football field could be.

With rumours, where there is smoke, there is fire.

The Ronaldo-to-MLS rumour is not a new one.

But last week these rumours heated up with – a rumoured – statement of intent from LAFC. They are set for their inaugural season in MLS in 2018 and are keen on making Ronaldo their first designated player.

What is more interesting about 2018 is it coincides with Ronaldo’s current Real Madrid contract running out which means he could arrive on a free transfer – while also coming off the back of a performance at the 2018 World Cup in Russia.

2018 may seem like a long way off but in football terms it is not. Ronaldo will still only be 33 years of age and with the outstanding condition he keeps himself in, could very much still be the greatest footballer on the planet when this time comes. Either way, even if he remains somewhere in the vicinity of his prime, this would be the biggest coup in the league’s history.

Wholly aware of his value off the pitch as well as on it; Ronaldo heading Stateside makes sense for reasons above football.

The glamour of America would provide a platform to better serve the commercial work of his CR7 brand more than Europe could.

Ronaldo has cultivated himself into the biggest name in world football with his brilliance and charisma, and following Beckham’s footsteps to one of America’s major cities could see his brand increase exponentially.

Every team needs an exciting player. LAFC know this and they don’t come much bigger than Ronaldo. This would truly announce their arrival into MLS.

But there are other suitors to his paycheck.

The news of Ronaldo buying a loft in NYC carries weight but a move to play for either NYCFC or New York Red Bulls is unlikely given the number of designated players already on their roster and the fact that these are more established clubs. Ronaldo will want to be part of defining a new footballing brand.

This places Miami into the equation, which throws up an interesting connection to a man whose trajectory Ronaldo has already followed to Manchester then Madrid.

David Beckham’s MLS franchise expansion plans had begun to drift alarmingly earlier his year but the mooted project is back on the table, and once the woes are behind them, all eyes will switch to who they plan to land as the face to build the franchise around.

Beckham is the messiah in this space. He brought MLS to the masses and paved the way for marquee players to maximise their brands and move to America to accelerate their global reach. This makes Miami a strong option for Ronaldo to align himself to in order to further his own ambitions.

Ronaldo clearly has his motives to further his own appeal.

Beyond the material side of the brand – like what they’ll call themselves, what their logo will be, the colours they’ll wear – are the more intangible brand associations like building a brand predicated on success. And any franchise is abundantly aware that Ronaldo is a big piece of the puzzle in achieving that.

Football is such a fluid World that no one really knows what will happen in three years time but being associated with Ronaldo’s arrival is a great PR vehicle for fuelling the league’s growth off the field.

When the timeframe is put into context, the league is likely to be even stronger by then. MLS has had success drawing several of the world’s top players to North America over the last few years, albeit towards the end of their careers. So by that time, who knows how many more stars would be plying their trade in the U.S. The MLS has already snagged young stars like Giovani dos Santos, Sebastian Giovinco and Jozy Altidore.

Ronaldo will likely go down as one of the five best players in the history of soccer. To get any of that refracted shine would be huge for MLS as it tries to shed that “retirement league” label.

One reply to “Ronaldo’s American Dream”