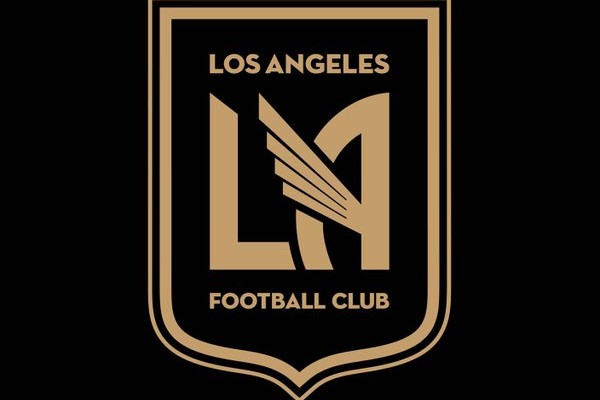 LAFC clearly understands the power of strong narrative – this being Will Ferrell’s opening gambit as the club coupled an event to showcase their new brand identity with one announcing Ferrell as the 26th member of their illustrious ownership group.

But this play wasn’t a surprising one, given L.A.’s role as a city of stars. Yet behind all the fanfare is an orchestrated blueprint for the success of this club. That plan starts with generating ‘want’ amongst their audience, and they announced a new identity doing just that – they give the city its’ wings.

Monikered The City of Angels, ‘wings’ have become a special symbol for what L.A stands for, so it wasn’t a wonder their logo celebrated that – the defining feature a stylized L.A. with an angel wing protruding through it.

Simple, black and gold, and uncomplicated.

This is a logo which speaks to the glamorous past of Los Angeles, and Hollywood’s golden age when the cities style sat under the umbrella of ‘art deco’. Critically, it’s an identity placing them firmly in the heart of Los Angeles and confirming an ambition to create an internationally known brand.

Here is a great piece on the rigour that went into the development of such an iconic logo: http://www.soccerbible.com/miscellaneous/2016/lafc-the-vision-journey/

While LAFC’s identity makes them identifiable (so much so, that after this event that the Club issued an email stating that heavy demand for their Adidas LAFC cap meant it was already on backorder), they need a culture to take form around it… as the famed Peter Drucker quote would advise.

The club made a bold promise, not only to the City of L.A. but also to soccer – that promise being “to unite the World’s city with the world’s game”. For this to happen, they need to ask the brand-shaping questions to help paint the canvas they have been given to design a soccer club – they need to make their gestures matter.

And so far, LAFC is doing this with a clear message to fans that they are as much the stewards of this team. They call these fans Originals and they are looking for them to help originate the club.

This sums it up:

As things stand, LAFC are a soccer team whose payroll consists of no players and no coaches, just an ownership group (with a, minor, net worth of $4.5 billion) and a back office team tasked not only with growing a club, but making one.

But, with aspirations to be on a par with some of the great clubs of the World and to be a leader for where soccer goes in America, its’ off-the-field team will prove just as significant. This is the type of calibre:

Despite the unconventional – yet very L.A. – introduction of its brand alongside Will Ferrell, this is a group of people who are also not joking when it comes to the success of this club.

It was only formally granted MLS entry 18 months ago, but the club is attracting attention and making all the right moves (it could be a playbook on ‘club development’ for future expansion teams – not least David Beckham’s Miami franchise – to follow, perhaps) with more than two years remaining before anybody officially kicks a ball.

But it’s easy to focus on being the club of the future if you are not fighting to win in the present. So now with that endeavour truly in motion, what matters next is how the club surge forward to with initiatives to ensure a high-class performance translates on the pitch:

Nothing but interesting times in Los Angeles, for the MLS and for soccer on the whole as Los Angeles Football gets ready to take itself onto the global pitch.